Games for Windows and the DirectX SDK blog

Technical tips, tricks, and news about game development for Microsoft platforms including desktop, Xbox, and UWP

The DirectX Capabilities Viewer utility dates back to the DirectX 5 era, which was written to help developers review the myriad “caps bits”, resolutions, and devices supported by DirectX components. It shipped in the legacy DirectX SDK, and then moved to the Windows 8.0 SDK, Windows 8.1 SDK, and ships in the Windows 10 SDK today.

This post covers some recent developments with this tool.

The ‘classic’ version of this tool enumerates devices/caps for Direct3D, DirectDraw, DirectSound, DirectInput, DirectPlay, and DirectMusic. Both DirectPlay and DirectMusic were deprecated a while back–the DirectMusic story is actually a bit more complicated than just deprecated–so support for these were removed from the DirectX SDK after August 2008. 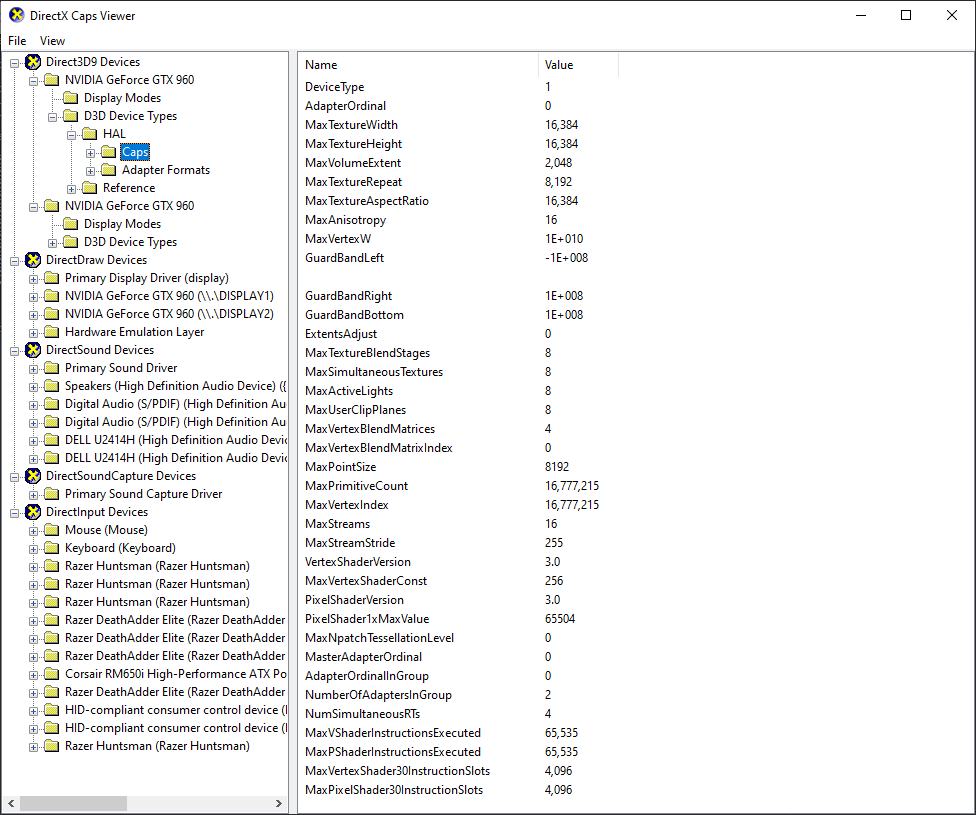 With the introduction of Direct3D 10, one of the main design points was to greatly simplify the ‘sea of caps bits’ problem for Direct3D, so the DxCapsViewer tool was considered uninteresting and left as legacy functionality. Direct3D 10 devices all did the same thing, so there was little point.

Then along came Direct3D 11 which not only introduced D3D_FEATURE_LEVEL_11_0, but also a few optional features like double-precision shaders. There was some optional support for DirectCompute 4.x on feature level 10.x hardware. It also came with new ‘10level9’ feature levels for Shader Model 2.0/3.0 era hardware. There was also the evolving story of WARP. With each hardware feature level, there were various rules about which formats were required and which were optional.

While this did not bring back the ‘sea of caps bits’ that was Direct3D 9 and prior, I was finding it a bit of a struggle to fully understand and document all this, and explain it succinctly in a talk I was working on in 2009. It was then I found myself picking this old, dusty, long-forgotten tool up and I added the “DXGI” device node.

The DirectX SDK (June 2010) release turned out to be the end-of-life release for the venerable product, and I was tasked with going through the inventory of what was there and finding new homes for them where applicable. One of the things I moved over to the Windows SDK was the DxCapsViewer tool. At the time the only real change was to remove the DirectInput and DirectSound functionality. I also added a few tweaks for Direct3D 11.1, D3D_FEATURE_LEVEL_11_1, and Direct3D 11.2. 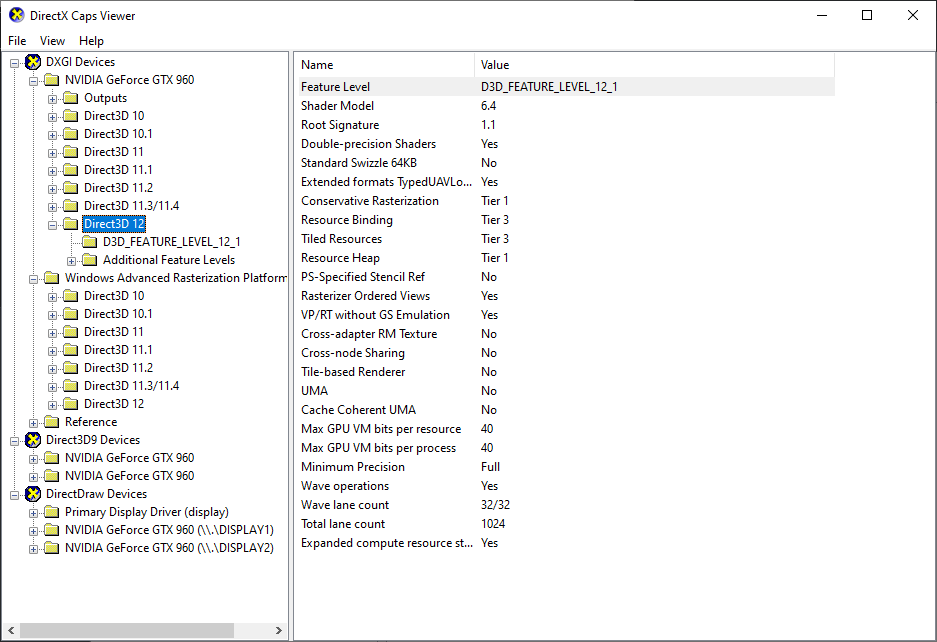 Over the past few releases of Windows 10, the tool had again aged a bit so I recently updated the tool for numerous optional Direct3D 12 features such as Pipeline libraries, Variable Rate Shading, DirectX Raytracing, and Amplification/Mesh Shaders.

The latest source for this tool is now available on GitHub. The latest functionality can be seen in the Windows 10 SDK Insider Preview or, of course, you can build it yourself from source.